Waterman has produced several filling mechanisms in addition to the lever-fillers and eyedroppers; for example, there was also the “coin filler.” The coin filler operates with a prop: Waterman provided a special “coin” to use with these pens. In the side of the barrel is an open rectangular shaped slot under which is a press bar.  Once depressed by the special coin (or of course anything else the user might decide to use), the bladder was evacuated and the pen would fill.

Waterman coin fillers are dated to 1913 and 1914.  Waterman was trying to get around Sheaffer’s winning lever-filler patent. The coin-fillers weren’t produced for very long, resulting in their relative rarity.

The 1913 coin-filler was the first pen introduced by Waterman which used a threaded cap rather than a slip cap. Slip caps tended to fall off in the pocket leaving quite a mess, so the threaded cap was a major improvement.  In the following year (1914)  Waterman provided threaded caps on their eyedropper-fill pens as well. Waterman produced the the pump-filler, sleeve-filler, and the coin-filler before the finally producing their long-lived lever-filler.  And how did Waterman get around Sheaffer’s lever-fill patent — by mounting their lever in a “lever-box.”  Ingenuity at its best!

If you are thinking it would be inconvenient to have to carry a coin to fill your pen, Waterman thought of that. The special coin was designed oval shaped with a hole at one side so he user could keep on their key ring. #15 below is an example of a Waterman Coin Filler with a sterling silver filigree pattern on black hard rubber.  Note: two pens to the left (#13) is a photo of Waterman’s short-lived “sleeve-filler.” 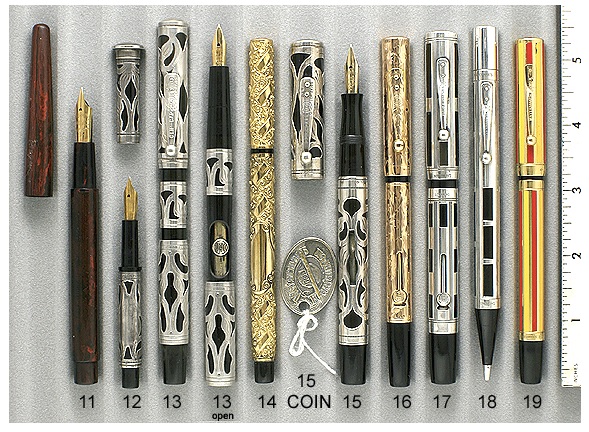