The following article is reprinted from the September 21, 2019 issue of the Kankakee Illinois County Daily Journal, with permission from the author, Jack Klasey.  The links throughout the article were added by me.  I hope you enjoy it.  Gary 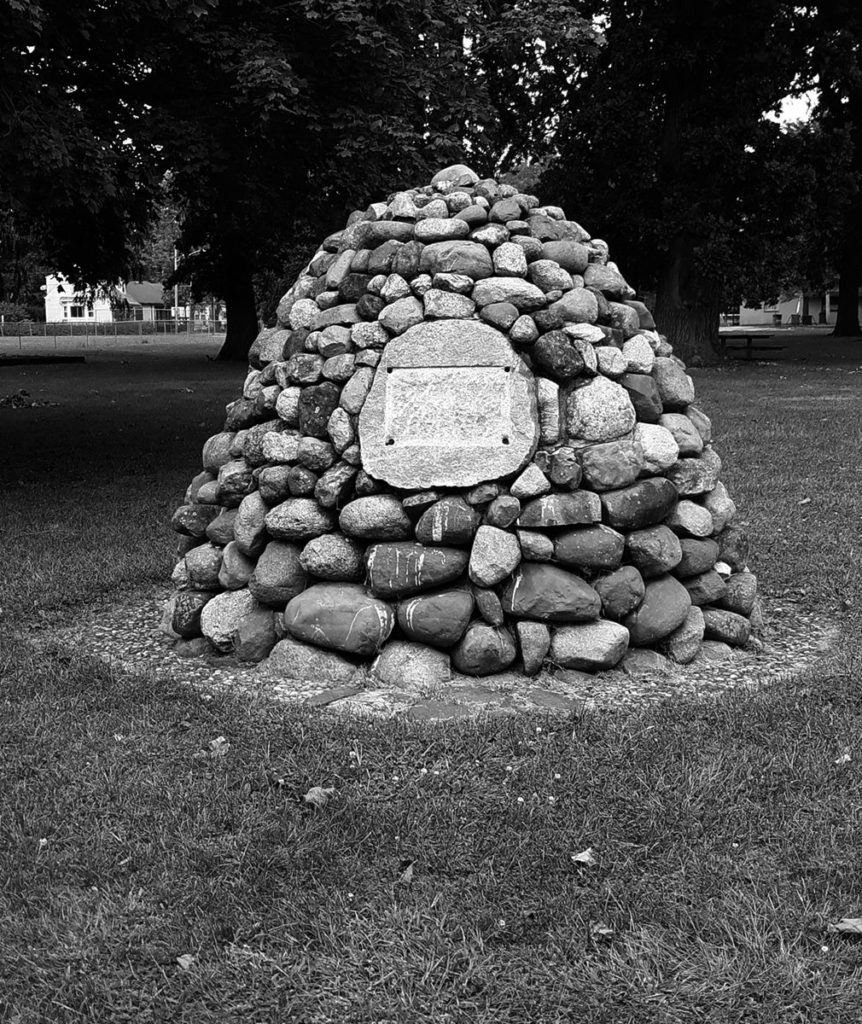 A rectangular recess on the front of the “mystery monument” once held the bronze plaque identifying the wooded riverfront area as Waterman Park. The plaque disappeared, probably some time before the park was renamed as Beckman Park in 1956. Kankakee County Museum Photo Archive

For more than 50 years, people visiting Kankakee’s Beckman Park have been puzzled by a dome-shaped construction on a grassy area along the north side of Cobb Boulevard. Built of large, rounded fieldstones, the 6-foot-tall object would seem to be a monument of some sort — but it displays no commemorative plaque, only a blank oval area on the side facing Cobb Boulevard.

The “mystery monument” actually did, many years ago, include a bronze plaque identifying its reason for existence. On the plaque were the words: “Waterman Park, named in honor of Frank D. Waterman, former resident and loyal friend of Kankakee, August 1, A.D. 1934.”

That information solves the mystery of why the monument was erected, but it raises two other questions: Who was Frank D. Waterman? Why was Kankakee’s then-largest park named for him?

In the 1930s, Frank Dan Waterman was a hugely successful businessman, president of the Waterman Pen Co., the world’s leading manufacturer of high quality fountain pens. His uncle, L.E. Waterman, had founded the company in 1883; when the elder Waterman died in 1901, he was succeeded as president by his leading salesman, Frank.

The park that would be named for Waterman originally was called Electric Park. It was opened in 1894 by the Kankakee Electric Street Railway Co., the city’s trolley line. Featuring a theater, dance hall, roller coaster, swimming beach and other recreational attractions, the park was designed to generate  ridership on the trolley line.

By the mid-1920s, the park had fallen into decline; patrons were few, and the structures were in a state of disrepair. In 1928, the Kankakee Park District acquired the property for $56,000 in a condemnation suit. The roller coaster and other decaying structures were torn down, and the property later reopened as the city’s largest park.

For a number of years, the Electric Park name continued to be used for the facility. In the mid-1930s, the Kankakee Chamber of Commerce spearheaded an effort to find a more appropriate name. In a speech delivered at park dedication ceremonies in 1935 (the actual name change and erection of the monument had taken place in 1934), Kankakee businessman Will C. Schneider observed “when the suggestion was made to rename Electric Park in honor of him, it struck a popular cord [sic] and thousands of people signed a petition asking that such be done. The Park Board took it up and by unanimous action, this beautiful Park was renamed and, for all time, will be known as Waterman Park.”

Waterman was a native of Kankakee, born in the tiny town of Altorf on July 20, 1869. His father, Elisha S. Waterman, was a wagonmaker; his mother, Delia, taught school at Altorf before she married. When Frank was still a small child, the family moved to Kankakee. Elisha Waterman died in 1883, and his widow was unable to continue his wagon-making business. To support herself and four children, Delia opened a millinery shop. Frank dropped out of school at the age of 14 to supplement the family’s  income, going to work at the Babcock Confectionary Store on East Avenue. To earn more money, he took on a second job, working evenings at a roller-skating rink on West Avenue. He then added $2 per month to the family’s income by pumping the organ at St. Paul’s Episcopal Church on Sunday mornings.

After a number of years working at various jobs in Kankakee, Frank moved to Pueblo, Colo. He went to work at a tailor shop, soliciting orders for suits from local businessmen. The ambitious young man had found the field —sales — that eventually would bring him fame and fortune.

While still in his early 20s, he was offered a sales position in his uncle’s pen-manufacturing business in New York City. At that time, the Waterman Pen Co. was a small affair, located in a room behind a cigar store. Frank’s selling skills helped to build the company into the nation’s leading maker of fountain pens. Frank became president of the company in 1901, when his uncle died. Under his leadership, Waterman Pen expanded into a worldwide business.

Even though he lived in New York and Florida (where he owned a luxury hotel called the Fountain Inn), Frank Waterman retained a strong connection to his boyhood home. Kankakee Mayor Roy D. Taylor, speaking at the 1935 park dedication, observed “Frank Waterman has led a very active and busy life, yet he has always found time to keep in touch with the affairs of this community and the welfare of its citizens and has always been glad to lend a helping hand when called upon.”

Childhood friend Will Schneider, another dedication ceremony speaker, recalled, “There is hardly a year that he does not visit our community and renew his old acquaintances. It is a matter of general comment that when he is in our midst he remembers and calls by their first name more people than we who have remained here all the time.”

Schneider had predicted the “beautiful park … for all time will be known as Waterman Park,” but it actually bore the Waterman name for only 22 years. In 1956, the park was renamed to honor former Kankakee Mayor Louis Beckman. At some time in that 20-year span, the bronze Waterman plaque disappeared, leaving only a blank-faced “mystery monument.”

Jack Klasey came to Kankakee County as a young Journal reporter in 1963 and became hooked on local history. In 1968, he co-authored “Of the People: A Popular History of Kankakee County.” He can be contacted at jwklasey@comcast.net. 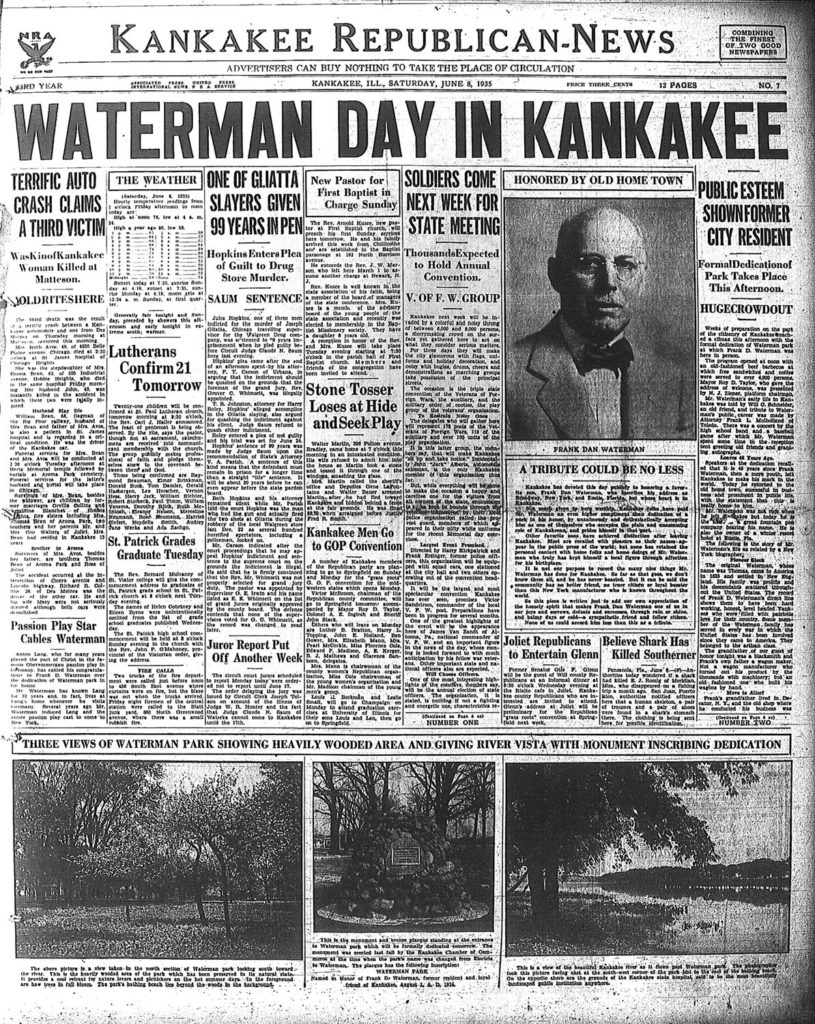 The major story on the front page of the Kankakee Republican-News on June 8, 1935 was the dedication of Waterman Park. The event drew a large crowd, including many people who know Waterman during his childhood and teenage years in Kankakee. Kankakee County Museum Photo Archive. 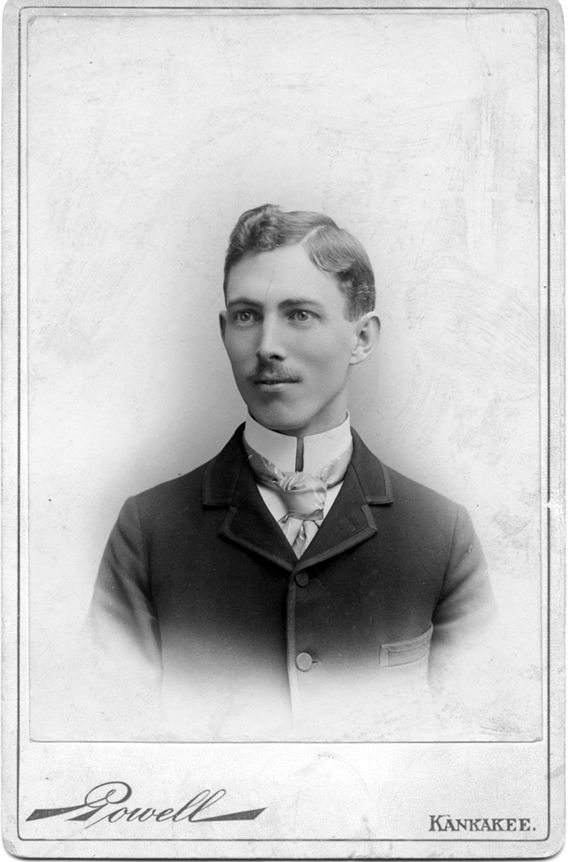 Frank D. Waterman, a native of Kankakee County, became president of the Waterman Pen Co. in 1901, when he was 32 years old. This portrait of Waterman, probably in his early 20s, was taken at Powell Studio in Kankakee. Kankakee County Museum Photo Archive 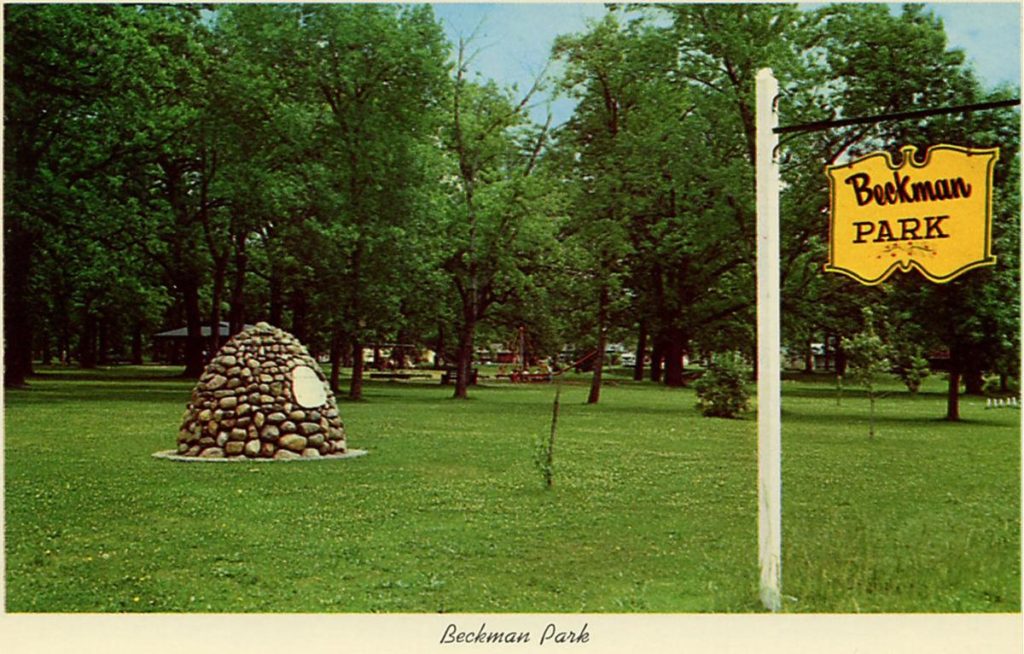 This 1960s postcard shows the “mystery monument” located on the north side of Cobb Boulevard, along with a sign designating the facility as Beckman Park. The park’s name was changed from Waterman to Beckman in 1956. Kankakee County Museum Photo Archive