You Can Thank The Biro Brothers…

“Thank You” to Mark Young, Managing Editor for The South Florida Reporter, for his permission to reprint the following article.  Gary Lehrer www.gopens.com 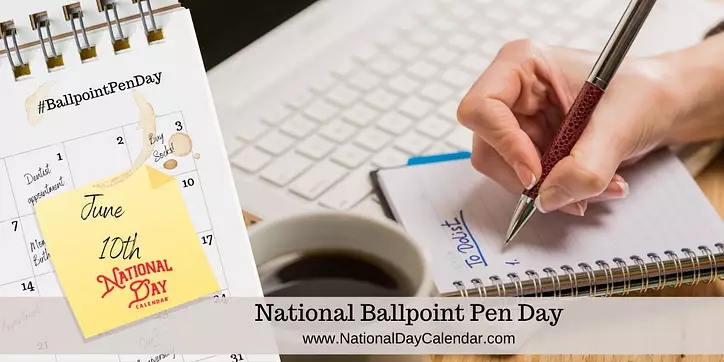 Grab your ballpoint pen and write this on your calendar. June 10th of each year, National Ballpoint Pen Day recognizes the useful writing utensil and commemorates the anniversary of the patent filing on June 10, 1943.

*Before 1943, anyone who wanted to write a letter or scribble some notes on a piece of paper used a fountain pen or pencil. Now the dominant writing instrument, the ballpoint pen was originally conceived and developed as a cleaner and more reliable alternative to the quill and fountain pens.

*In earlier years, many attempts by inventors led to failed patents as their inventions did not deliver the ink evenly. They also had overflow and clogging issues.

*The first patent for a ballpoint pen was issued in 1888 to John J Loud, however the design was useful only for writing on very coarse materials like wood or leather and was never made commercially.

*However, in June of 1943, the brothers Laszlo and Gyorgy Biro obtained their patent for the ballpoint pen, revolutionizing how many write letters and conduct business. László and György, Biro, Hungarian inventors’ new pen, was inspired by the quick-drying inks used by professional printers.

*On June 10th of 1943, Hungarian brothers Laszlo and Gyorgy Biro walked into a European patent office to declare ownership of their new writing pen design.

*Some of the most expensive ballpoint pens are made from carefully designed metal tubes, they even come in gold and silver! Not all ball point pens are disposable, some of them are refillable, just like the fountain pens.

*Each second of every day, more than 125 ballpoint pens are sold

*An average ballpoint pen will write approximately 50,000 words – or about 100 pages of text
4.3 pens are used, on average, by each person in the United States each year

*Ballpoint pens range from about 7-cents each, to over $730,000 for the Mont Blanc ballpoint

*Before acquiring the rights to the ballpoint pen, RAF flyers used feather pens in the cockpit

*The first ballpoint pens sold in the U.S. were sold at Gimbel’s department store in New York City beginning on October 29th, 1945 and cost $12.45 a piece at the time (approximately $170 in today’s dollars). They were widely popular, with Gimbel’s selling through 30,000 pieces of their initial 50,000 piece order in their first week.

*3.4 billion ballpoint pens are imported into the USA each year

*56% of individuals own a logoed or customized ballpoint pen

*95% of the time, when a person receives a new pen, the first word they write is their name

*Ballpoint pens were very popular among pilots in World War II because they did not leak at high altitudes.

*The oldest surviving fountain pen is from 1702. It was designed by M. Bion from France.

*Parts of Dead Sea Scrolls, which are written somewhere around 100 BC, were written with quills.
The president of the United States signs bills every time with a different pen and that pen is never used again for signing.

*Parker’s ballpoint pens can write a line 8 km (4.97 miles) long before they run out of ink.

*The iconic Bic Cristal pen was launched in 1950 and has gone on to sell 57 pens per second, hitting 100 billion pens sold in September of 2006. It is included in the permanent collection at the New York Museum of Modern Art.

Days of the Year