How did the Paper Mate Ballpen come to be? Read on…

In 1943 the Biro brothers set up a ball pen manufacturing plant in Argentina. Their first design failed because it relied on gravity to feed the ball. Their second design was much more successful, using capillary attraction for the ink flow. While better, this design also failed in the marketplace, mainly due to problems with the ink. Eventually they closed up shop. The rights to their pen were then first sold to Eberhard Faber which then resold them to the Eversharp Company, which improved the pen and was ready to enter the market, but lost out to the Reynolds Pen Company because of Reynold’s their faster market entry (multiple law suits ensued). More about the Reynold’s pen follows.

In 1945 Milton Reynolds introduced the Reynolds ball pen which at first sold very well due to it’s novelty and advertising, but were expensive and didn’t work very well. Neither did the many other ball pens introduced over the next few years by a variety of small manufacturers. By the late 1940s the ball pen had a terrible, and well deserved, reputation. Among the issues were that they leaked onto your hands, into your pocket and blobbed onto the paper, they dried out, they didn’t start when put to paper, they allowed transfer of signatures because the ink didn’t completely dry (forgers loved ‘em!), they didn’t write with a constant, controlled ink flow.

A chemist, Fran Seech developed a working ink, which dried instantly once it was on paper. Patrick Frawley borrowed money from his family and bought the rights. He then took over the failed Todd Pen Company so he could produce the “Paper Mate” ballpen, a very dependable pen and the only ball pen on the market to provide the public with this great ink. Unfortunately, they didn’t sell, most likely because of the extremely poor reputation of ball pens in general.

So, what did Frawley do? He gave them away, mostly to bankers and other professionals, and began to gather endorsements regarding the pen’s performance. Note on the matchbook the greatly emphasized “Bankers Approve.” Frawley then paid dealers to take his pens on consignment and offered joint advertising. Eventually the pen caught on, developed a wonderful reputation, new designs were developed, patented and introduced. Aided by the biggest pen advertising budget in the pen business, they became the number one ball pen worldwide. Significant competition came along, for example, with the Parker Jotter in the mid-1950s and the Bic in the late 1950s, but the market was big enough for everyone.

In 1955 the Frawley Pen Company was acquired by Gillette which subsequently acquired Liquid Paper and The Waterman Pen Company. In 2000 these were all sold to Newell Rubbermade. 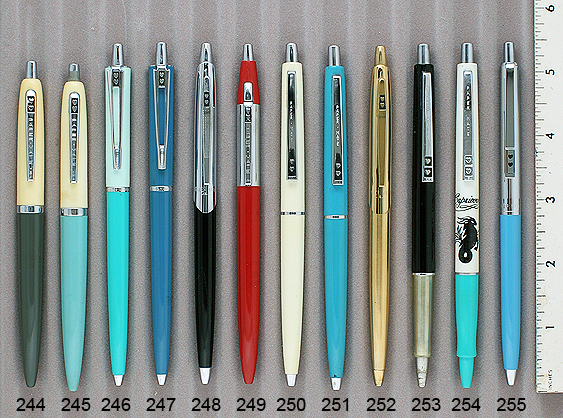 Examples of Paper Mate Ballpens from the 1950’s and 60s. Left to right:

1955 Button-activated two-tone pen in Cream & Grey. Chrome trim. It came in many color combinations and advertising suggested you buy the same colors as your car.

1955 Button-activated two-tone pen in Cream & Blue. Chrome trim. It came in many color combinations and advertising suggested you buy the same colors as your car.

1959 “Ninety-Eight” button-activated in Red and Chrome. The retractor button is mounted above the clip.

1966 Button-activated in two-toned Cream and Turquoise with rocket-shaped gripping section. Chrome trim. Imprinted on the pen is “Capricorn” with a crab. On the back side of the pen are the Capricorn dates (12/22 – 1/19) and a list of positive personality traits of those who are Capricorns.

Thanks to https://home.howstuffworks.com/pen2.htm (How Ballpens Work by Melissa Russell-Ausley) for some of the information above.

Do you have any photos and/or information about other Paper Mate pens? Please share below.

This entry was posted in Biro, Biro Ball Pens, Matchbooks, Paper Mate Pens, Vintage Pen, Vintage Pens. Bookmark the permalink. Follow any comments here with the RSS feed for this post. Post a comment or leave a trackback: Trackback URL.