REMMIE LeROY ARNOLD – on a Matchbook 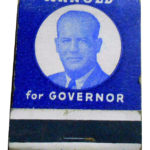 You ask, “Why include Remmie LeRoy Arnold running for Governor of Virginia in a fountain pen blog?” Well, read on, by the second paragraph you will know. Read more and I’m sure you’ll say to yourself, “Wow, what a guy!” The following is from the Virginia Chronicle Recorder, November 26, 1948. 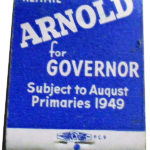 “Highlights in the Life of Remmie Leßoy Arnold.  A biographical sketch of the life of Remmie Leßoy Arnold, who has announced himself as a candidate for the Governorship of Virginia follows: Born in Petersburg January 25, 1894, Arnold attended the public schools of that city for five years and then attained the remainder of his education by the “hard way of trial and errors. He began his business career at the age of 13 in a planing mill and subsequently held jobs as a worker in a trunk factory, stock room clerk in a shoe factory, repairman in a jewelry store and in various railroad jobs before going to the Edison Pen Company in 1915.

“In a matter of a few years he. rose to manager and president of the [Edison Pen] company and in 1935 he founded the R. L. Arnold Pen Company in Petersburg, which he built into the “second largest manufacturer of mechanical pencils and fountain pens in the world.” 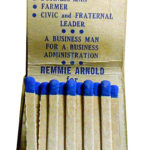 “For the past 13 years his success has been almost phenomenal. From this vantage point, he rose to be twice elected president of the Southern States Industrial Council, covering industries in all southern states. Most of his national notoriety comes from his connections in the fraternal world. These exploits hare dubbed him a ‘”joiner extraordinary.” He has for many years been one of the leading figures in the amine and in 1954 will become Imperial Potentate of all Shrindom in America So well is he known and honored that he holds lifetime membership in 72 of the 159 Shrine temples in North America. He has served as national president for both the American War Dads and the Circus Saints and Shriners of America and is at present a national councilor for the United States Chamber of Commerce and a member of the Advisory Board of the National Security Committee.

Associate of Manufacturers, The Dokeys and Knights of Pythias. His other memberships are numerous and varied. They include: the Elks, Eagles, Saints and Sinners, Masons, Kiwanis, Red Men, the Adventurers Club of New York, U. S. Navy League, the Petersburg Chamber of Commerce, the Virginia State Chamber of Commerce, the Civilian Flying Corps, the League of Virginia Municipalities, Shriner Clubs of Petersburg, Richmond, Alexandria, Staunton, Winchester and Farmville and numerous other smaller organizations. In addition to this he is president and owner of the R. L. 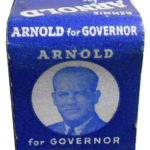 Arnold Pen Company and serves on numerous labor and management committees in the state and nation. He served for eight years on the Petersburg City Council, 1936-44, and has been active in civic affairs of that city. In his wartime role as president of the American War Dads he was a guest of the Supreme Allied Command and the British Government for an extensive tour of the battlefields of France, Belgium, Italy and North Africa. On this tour in 1944 he literally lived in the field with G.I.’s for over six weeks and won respect of military and civilian leaders in these countries and in England where he toured U. S. and British bases which served the operations in Europe. Back home in Petersburg he assisted in practically every move made in that area in connection with home defense and served as head of several committees for conducting the “home war” on the home front.”

In 1993 his son, Remmie Leroy Arnold, was granted a patent (5207524) for a ball point pen adapter allowing a refill to be adjusted in length to become “substantially equal in length the exhausted refill.” The Arnold Pen Company survived through 2005 having switched from fountain pen production to become a ball pen manufacturer.