This 1918 Parker “Black Giant” is an interesting pen. A lot of vintage pens tend to be on the smaller side, so this one definitely stands out. Have a look at it (Pen #10) next to the other pens! It’s a wide pen. 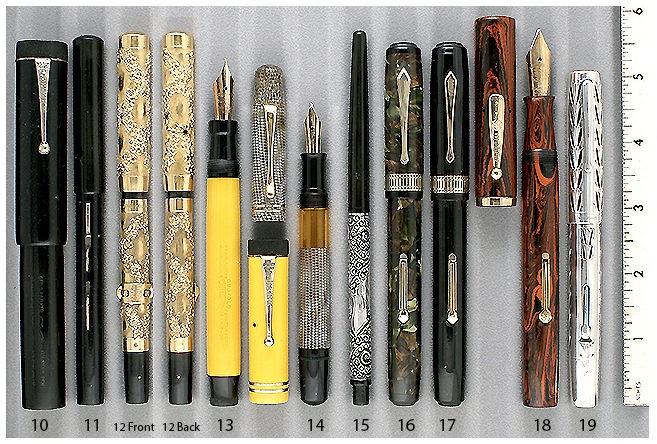 The “Black Giant” eyedropper-filler here is in Black Hard Rubber. Parker’s first “Giant,” the “Red Giant,” introduced in 1909 at $10, failed because the cap was too brittle and Parker was losing too much money honoring their warrantees. This was less of a problem with the “Black Giant,” introduced soon afterwards. These are found clipless, with a “split” clip (open in the back), and a full washer clip, such as this example. They also are found with and without a cap imprint (this example is without). The pen also came in two lengths; this being the longer version. To match the size of the pen, the pen is fitted with a huge #12 fine nib. Rare, beautiful and very desirable! Crisp barrel imprint with no wear at all. Near mint+!

This entry was posted in Vintage Pens and tagged Extraordinary Pens, Parker. Bookmark the permalink. Follow any comments here with the RSS feed for this post. Post a comment or leave a trackback: Trackback URL.